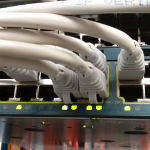 10 gigabit ethernet is a great technology, offering far more bandwidth than anyone should ever need in the home, it’s most often found running in and between data centres.

It started as a fibre based technology, able to run 10km and beyond over single mode fibre (or multimode over shorter distances if you must).

A relatively recent development has been 10Gbase-T, promising to bring copper cabling over the gigabit mark. I recently purchased a copper 10 gigabit transceiver to see how well it works. The prices for these things are around the €50 mark at the time of writing.

The one I got was identical in size and shape to the old 1 gigabit "copper SFP", some of the earlier 10G-T adapters had significant extra power requirements and protrusions from the SFP socket that might not be welcome if the switch is near the door of the rack or unable to cool the optic.

First test was over a 2 metre Cat 5e patch lead to a HP server with a BCM57810 based card in it. So far so good, it linked at 10Gbps and was able to exchange close to that figure with another server on the same switch connected with a traditional SFP+ optic and fibre cable. Strictly speaking you are meant to use Category 6 for 10G, but this worked fine over the short distance. The switch thinks it is a 10G multimode SFP+.

Moving the test to hard mode was more interesting. I have a "Late 2018" Mac Mini desktop that has a 10g copper port on the back. Between me and the lab switch are a patch panel, a wall socket, a couple of patch leads and about 20 metres of cable in the walls, all this is Cat5e spec, not the Cat6 that 10G on copper demands. This was of course fine for the 100 megabits that I ran over it after I installed it a decade ago but will it run at 100x that speed?

The answer was simply no, it won’t, however it then went and surprised me somewhat as it did sync at 5Gbps.

I was not anticipating any speeds other than 1 or 10 out of this device, so that was unexpected. The switch still saw it as a 10Gbps multimode SFP, however it seems that when it is working at one of these multi-gig speeds, it deals with the difference in speed by just dropping the next packet if one is already “in flight”. This led to real world TCP throughput of only about 1.2Gbps (or 600mbps if I pushed the speed down to 2.5G), however all was not lost. With a 50% shaper applied on egress to the switch port, it managed speeds as measured with iperf3 of 4.7Gbps each way.

So I now have a desktop computer linked to the rest of the network at 5Gbps instead of 1. It's definitely progress, and files do copy more quickly between this machine and a local SAMBA based server running on the machine with the 10G SFP+ connection. It's not life changing, although I might appreciate it more if I ever move into video production.